Eastern Townships’ own effervescent region has progressed through the last thirty years to become one of the must-see attractions in Quebec.

Brothers François and Jean-Paul Scieur have studied and researched local winemaking methods to create the Sélection sparkling wines range, favored by sommeliers: the Sélection Blanc de Blancs, the Sélection Brut Nature and the Sélection Rosée. Created in 2009, the Quebec’ Effervescent Universe has already become renowned by its peers.

Destined to be winemakers

From an early age, the Scieur brothers worked on the family vineyard in Étoges (France), in the Champagne-Ardenne region. They learned all of the grape secrets of the wine growing and the winemaking from their parents. The family is also behind the well-known Champagne Scieur & Fils, now managed by Michel, their older brother.

Fortunate from their rich legacy, François was certified by the École familiale rurale de Gionges for finishing the Vines and Wines class, while Jean-Paul developed a mechanical expertise and human resources skills.

The origin of Le Cep d’Argent winery goes back to the meeting of six men – two from France and four from Quebec. The Frenchmen from the region of Étoges in Champagne had been friends since they were viticulture students. The four Quebecers had a medical background. Epicureans to the core, they all dreamed of embarking on a grand adventure, by launching a winery in Quebec. 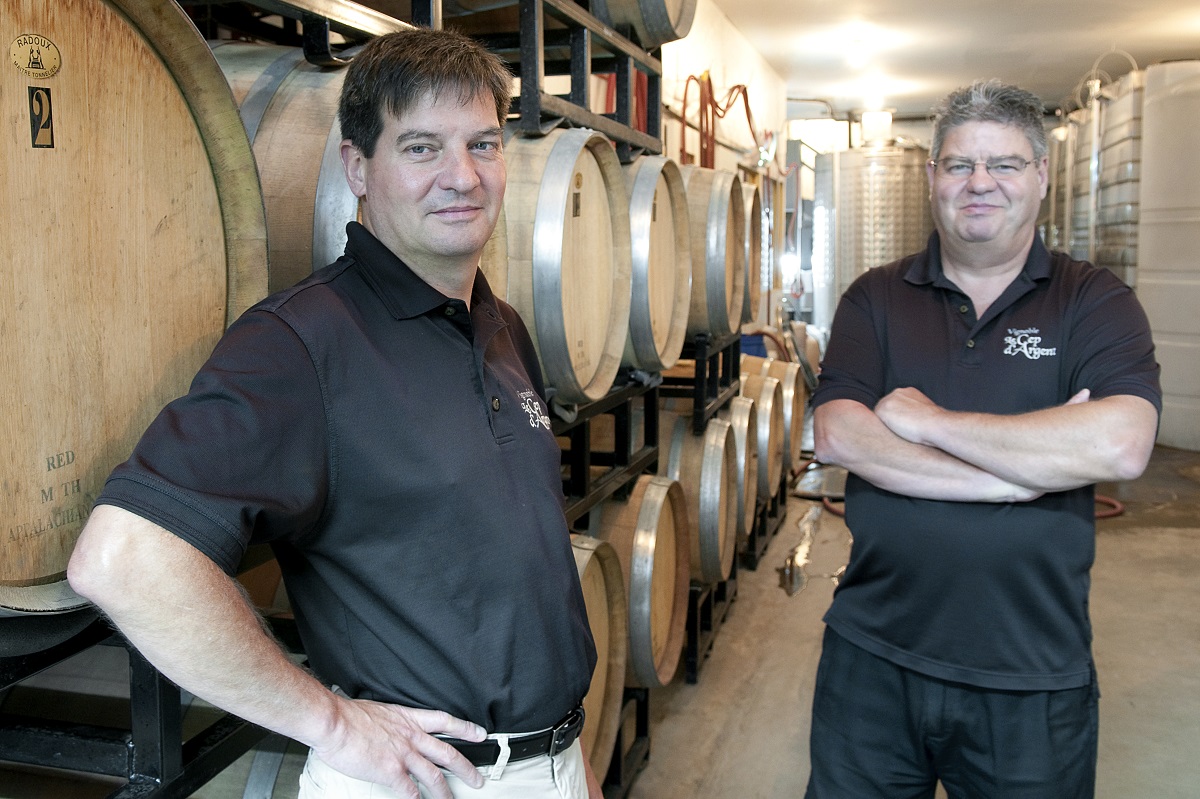 After much research, study and analysis of Quebec’s soils and temperatures, they bought a 46-hectare plot of land on the western slope of the Appalachian plateau. The property had all the required ingredients – a gentle slope, a microclimate deemed suitable for grape growing and the lake Magog which lies at 200 metres above sea level. The setting even inspired the winery’s name. Le Cep means « vine » in French and ties in with the proprietors’ relationship with that plant. Argent –« silver » – refers to the shimmering reflections on the lake.

The first vines were planted in 1985. Production started in 1987. Doors opened to the public in 1988. Visitors were able to buy Le Délice du Chai and Le Cep d’Argent as well as take guided tours of the property, learning about grape cultivation and how the wine was made.

Passionate about the product of the terroir, the owners of the winery never missed an opportunity to celebrate the best that the land had to offer. In 1991, they came up with a fun way to reach out to wine lovers by issuing an invitation to celebrate the grape harvest. The response was wildly enthusiastic! Since the fall of 1993, the Fête des Vendanges du vignoble Le Cep d’Argent has been known as La Fête des Vendanges Magog-Orford.  The Magog-Orford Grape Festival, as it’s called in English, was the first ever step towards celebrating the wine harvest in Quebec and it has now become a not-to-be-missed fixture in the yearly calendar.

Both innovators, François and Jean-Paul Scieur are proud of having pioneered this festive event. Their primary goal was to bring together the general public and the vintners who are at the heart of Quebecers’s passion for local products – a passion that grows stronger, year after year! From one great vintage to the next, season after season, each Grape Festival becomes ever more heady, full-bodied and smooth.